Jun 01, 2018Dale BarkerTravelComments Off on Top squares of Barcelona

Barcelona is one of the most famous cities all around the world thanks to its beaches, its cosmopolitan environment, its beautiful modernistic buildingsand a great multicultural society.

The charm of this Mediterranean city is beyond any doubt. Indeed, the Catalan capital is a city formed by several neighbourhoods, each of them with its own style and personality.

Some of this neighbourhoods host narrow streets with local commerce and shops and charming squares with terraces where we can enjoy some tapas or the classic vermouth at midday.

Here we present some of these beautiful squares. So, don’t hesitate to check AinB apartments in Barcelona and rent your favourite.

This is not one of the traditional, small and charming squares we were talking about, but its beauty is beyond any doubt.

Plaça de Catalunya (meaning in English “Catalonia Square”) is a large square in central Barcelona that is generally considered to be both its city centre and the place where the old city and the 19th century-built Eixample meet. It is, indeed, the heart of the Catalan capital.

Some of the city’s most important streets and avenues meet at Plaça Catalunya. 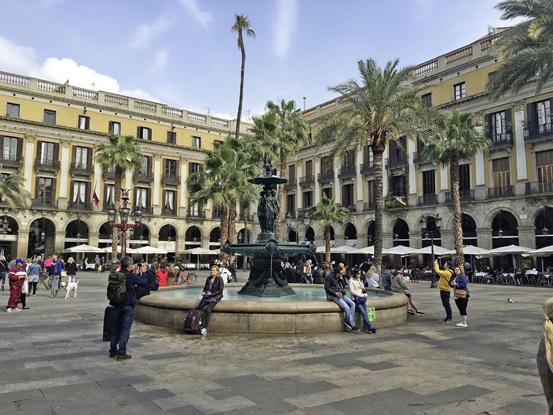 It is one of the largest squares in theGràciadistrict. It was built in 1840, when Gràcia was still a village, independent from the city.

Plaça de Sol (“Sun Square” in English) is a lively square, full of restaurants and bars, and is one of the favorite places for the residents of Gràcia to meet with friends.

In summer nights, many young people meet there and sit on the square’s floor to share beers, talk and even play some music.

Plaçad’Osca is, with no doubt, the jewel of lovers of terraces in the neighbourhood of Sants.

At the momentthe popular spirit of this charming square is maintained, being a place of meeting of people. Closed to traffic and flanked by tall trees, the square is populated by bars and restaurants and, with its terraces, delight lovers of vermouths and open-air meals.

If we walk through The Ramblas we find PlaçaReial (meaning “Royal Square” in English), one of the most beautiful squares in all Barcelona.

A precious fountain in the middle of the square surrounded by an army formed by palms and two lampposts designed by Antoni Gaudi himself. It’s a pretty good letter of introduction, isn’t it?

Furthermore, there are plenty of restaurants with terraces and clubs with all kind of music such as Jamboree: a well-known jazz-club.