The 5 Most Beautiful Hotels in Cuba

Jul 23, 2017adminTravelComments Off on The 5 Most Beautiful Hotels in Cuba

There are pros and cons to staying in a really good hotel. You land at the airport and stare eagerly as the exotic landscape unfolds around you. In the back of the taxi, you might be tempted to stick your head out the window and take it all in, much like an excitable puppy. And then you arrive at your hotel and check in. You soak it up, looking at the comfort, the luxury, with masses of smiling staff all there to cater to your every demand and who call you sir or madam. Not a bad life, really. If the hotel is too good, it has the potential to make you lazy. Yes, you’ll want to go out and explore everything around you, but you might find yourself fighting the temptation to just stay in the hotel. It’s your holiday, so it’s your choice if you want to sleep until the afternoon and then order room service before sitting by the pool. That temple/flea market/Eiffel Tower will still be there tomorrow! These 6 stunning hotels in Cuba can offer a wonderful experience for a guest, but they have in fact become tourist attractions in their own right. 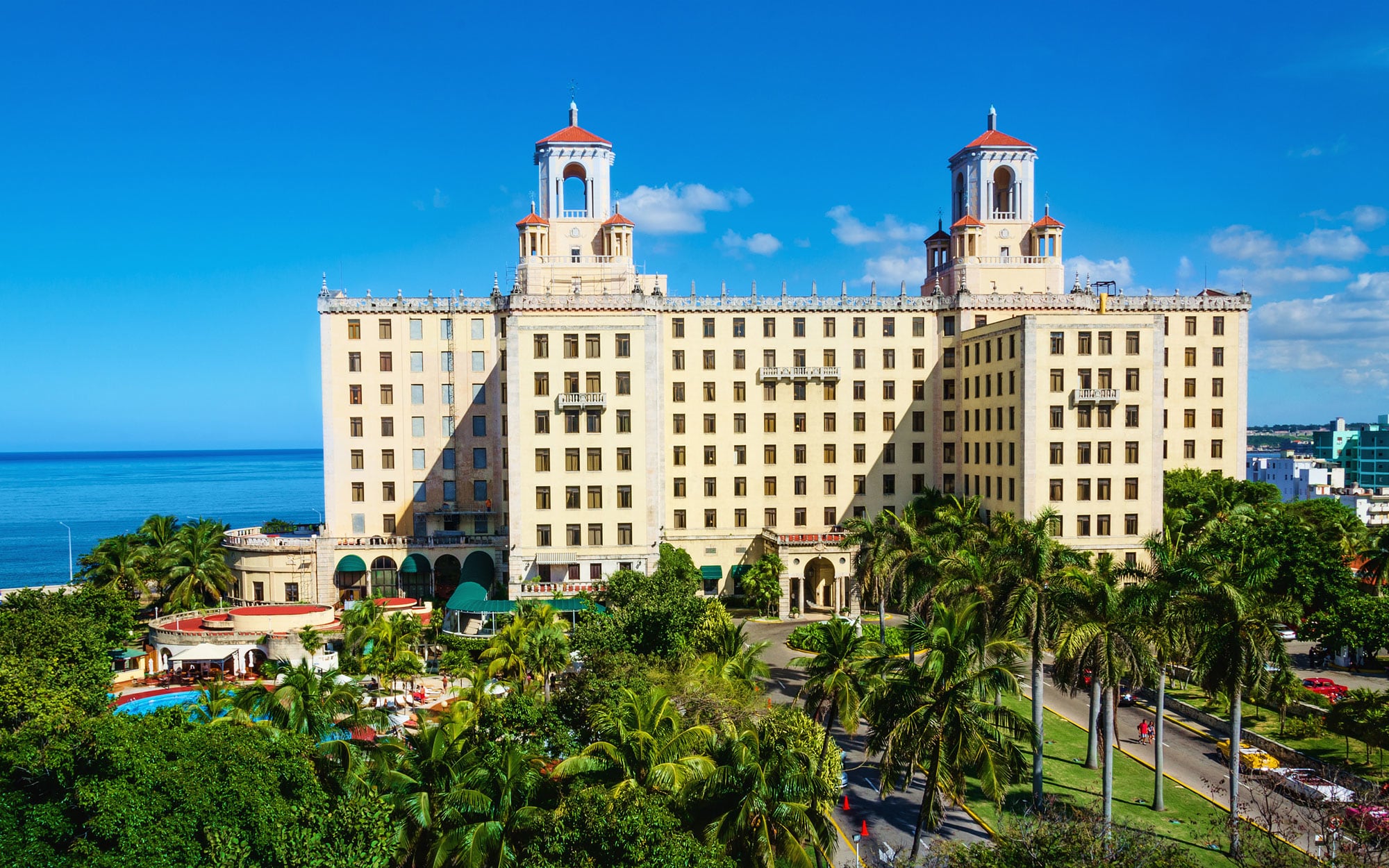 In the years before the Cuban Revolution, the country was a playground for the rich and the famous of the USA. Cuba was exotic, inexpensive, and geographically convenient. A lot of money could be made by opening a hotel in Cuba, and this was utilised rather successfully by the mafia. The Hotel Riviera was opened in 1957 by Meyer Lansky who was known as the “mob’s accountant,” and found himself in the favourable position of being chums with President Batista, who was overthrown in the Cuban Revolution. A savvy criminal who was acquitted of all charges against him, Lansky died peacefully in 1983. He leaves behind the 50s style opulence of the Hotel Riviera, and although it has been refurbished a number of times over the year, it has deliberately kept its glamour.

When staring up at the straight, almost uniform structure that is the Meliá, you might wonder why this has been included on a list of the most beautiful hotels in Cuba. The mirrored facade of the building rises above the rest of Santiago de Cuba, with its modernity clashing rather oddly with the rest of the town’s architecture. When the evening sun hits the building just right, it can look dazzling, like something from the future that has been blindly dropped into the heart of Cuba’s second largest city. We think its beauty is best enjoyed from its interior, and so you should head inside and go to the rooftop bar and restaurant for the most dazzling views imaginable.

Perhaps the most beautiful art deco building in a country that doesn’t exactly have a shortage of them, the Hotel Nacional de Cuba first opened for business in December 1930. It’s the sort of setting that would lend itself well to a historically themed TV show, since the hotel has seen more than its fair share of international intrigue and culture over the decades. It was the site of a bloody battle in 1933 after a struggle for control of the army (with opposing troops actually shooting at each other from the windows of the hotel itself). It has hosted celebrities, dignitaries, revolutionaries and organised crime figures. Take a stroll around the gardens of the hotel before enjoying a cocktail in the lobby bar and soaking up the history (in addition to soaking up the alcohol in your mojito).

Nestled on the edge of colonial Trinidad, this stupendous building harks back to the days when the region was the prosperous sugar producing heart of Cuba. The pastel green of the building offers a subtle contrast to the lush green hills that provide a picturesque backdrop to the hotel. Trust us, if you stay here (or really, even if you don’t), you will end up taking rather  a lot of photos of this stunning building. It’s the sort of place where you will want to dress up and sweep dramatically up and down staircases.

Back to Havana for one of the loveliest spots in the city. Tailor made tours of the city are going to allow you to explore Havana’s historical centre, and the Hotel Ambos Mundos is going to be a highlight. The apricot coloured facade of the building hides its impressive literary history. This hotel was in fact home to Ernest Hemingway for seven years in the 1930s, and the author locked himself in room 511 to write all day, before wandering into the city to presumably drink all night. The room has been preserved in the style of the era (although don’t worry if you stay here, since all the other rooms have been updated with modern conveniences) and operates as a small museum dedicated to Hemingway’s time in the hotel.